GB advances to the quarterfinals of the United Cup as

In the opening service game of the decisive set, Evans broke his opponent, and although the Spaniard hit back to tie the match at 2-2, he rallied once again. At 5-3, Ramos-Violas saved a match point on his serve, but Evans remained unfazed and served out the following game to secure Britain’s spot in the final eight.
When Paula Badosa, the world No. 13, defeated Harriet Dart 6-7 (6), 7-6 (5), 6-1 earlier in the day, Britain’s hope to win was lost. The winner of Group C, which also included the Czech Republic, Germany, and the United States, will now compete against Britain in the “city final” on Wednesday at Sydney’s Ken Rosewall Arena. 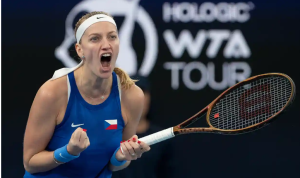 Spain will play Australia next. Australia will be missing Ajla Tomljanovic as she withdrew from the competition in order to recuperate from a minor knee injury in time for the Australian Open, which starts on January 16. Additionally missing is Nick Kyrgios, who is preparing for the major.

Petra Kvitova previously defeated Laura Siegemund 6-4, 6-2 to earn her second straight triumph in the competition, giving the Czech Republic a 3-0 lead against Germany. Before Siegemund and Alexander Zverev upset Marie Bouzkova and Jiri Lehecka 6-4, 7-6, Siegemund and Dalibor Svrcina paired up for another consolation victory, giving Germany their first victory (1).
After losing to the United States in their opening round-robin match, the Czech Republic now has one victory and one loss from two matches. Germany will be their next opponent in Group C.

In Perth’s first-ever United Cup mixed doubles match, Bulgaria’s Alexandar Lazarov and Isabella Shinikova defeated Belgium’s David Goffin and Elise Mertens by saving a match point to win 3-2 in Group A. Casper Ruud defeated Thiago Monteiro 6-3, 6-2 to secure Norway’s lone victory in their 4-1 Group E loss against Brazil.
In Group B, Poland defeated Kazakhstan 3-1 thanks to victories by Hubert Hurkacz and Magda Linette in Brisbane. Argentina’s dreams of making it out of Perth were destroyed by Croatia, who defeated them 3-0 for the second time in a row in Group F.

Three cities are hosting the United Cup, with the two group winners from each site meeting to decide who advances to the last-four round. The “city final” runner-up with the best record after their three games will advance to the semifinal round. The final will be held in Sydney on Sunday.

Mikel Arteta praises the “huge win” at Brighton as Arsenal extends their lead to seven points.

We need your help with a simple favor. Every day, millions of people look to the Guardian for unbiased, high-quality news, and we now receive financial support from readers in 180 different nations.

We think everyone should have access to information that is based on facts and science, as well as analysis that is grounded in authority and integrity. Because of this, we took a different tack and decided to keep our reporting accessible to all readers, regardless of their location or financial situation. More people will be better informed, united, and motivated to take significant action as a result.