Similar to how they treated the miners, the media paints the striking nurses and ambulance drivers as the enemy.

In 1984, when miners went on strike to defend their industry against a government initiative aimed at destroying it entirely, Margaret Thatcher immediately referred to them and their families as the “enemy within.” The government’s response mirrors previous actions as strikes spread throughout Britain.

The government is determined to push through wage reductions, regardless of who they affect, whether rail workers, train drivers, Royal Mail employees, barristers, postal workers, waste workers, London Underground employees, air transport workers, or our amazing NHS nurses. Since the financial catastrophe of 2008—a crash that was not caused by those who suffered the most but for which they continue to pay the price—cuts in working-class living standards have been ongoing.
During the epidemic, we witnessed Rishi Sunak and Boris Johnson standing on the steps of Downing Street commending our valiant NHS workers and pushing the rest of the country to do the same, all the while No. 10 staff members were enjoying parties that involved drinking beer and wine. How long before calling the employees of our NHS the internal enemy?

Like the miners did in 1984 and 1985, many of those protesting today are working to maintain their industry in addition to campaigning for higher wages. The continued funding cuts to our NHS and the covert privatization of our healthcare system pose a threat to both its survival and the wellbeing of the country. Aneurin Bevan’s vision of universal healthcare that was free for anybody who needed it is being slowly destroyed by those who never liked it in the hopes that no one would notice until it is gone.

Women’s right to education is being restricted by the Taliban. We can’t afford for the world to be silent.

Many employees are receiving wage increases that are much lower than inflation. 8% over two years is the most recent offer made to rail personnel. Only 4% over the course of the two years. This offer represents a 10% real-terms wage drop given the retail prices index’s current value of 14%. Even with inflation currently running at 10.7% according to the consumer prices index (CPI), the offer represents a sizable 6.7% wage reduction. The majority of workers in the UK are being asked to accept significant real-terms pay cutbacks even as living expenses are skyrocketing. Despite the government’s cost of living assistance program, heating a typical three-bedroom home will cost £2,100 over the course of a year beginning in October 2022 due to rising energy costs.

When the government proposes salary increases, or in this case, wage decreases, we typically hear two mantras. The first claim is that the pay cut is “generous,” and the second is that it is the only option available. As of April 2022, the annual salary of an MP was £84,144 plus allowances. In contrast, while at work, NHS employees, including nurses, must pay to park in hospital lots. 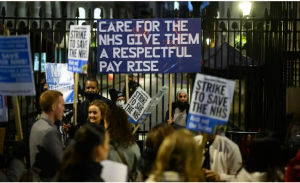 Former Sun editor Kelvin MacKenzie claimed this month that the ambulance staff’s walkout was the result of “organized hostility.” Every day, ambulance professionals save lives. They are devoted individuals. Such mockery is a blatant attempt to engage striking workers in a powerless low-level struggle that only the tabloids can win. It indicates that the government and tabloids have already conceded the debate when they accuse regular people protesting pay cuts of being the “enemy within.”
We received everyday misinformation, outright lies, and insults from the gutter press throughout the miners’ strike. Yes, there were moments when it hurt, but it was always best to brush it off and avoid lowering oneself to that state. It was much better to make every effort to make what we thought was a strong argument whenever we had the chance. I believe the unions have done well in their interactions with the media; union leaders like Mick Lynch have presented a collected and convincing argument for why strikes are a reasonable response to this historically tightening of working conditions.

Naturally, you continue to attempt to refute a false narrative. Criticism that stems from a lack of grasp of the issues has to be refuted. During the miners’ strike, it was crucial to seize every chance to offer what we thought to be a strong argument.

Not mentioning Russia’s conflict in Ukraine, which is the primary cause of the spiraling inflation we are witnessing throughout Europe, would be a dereliction of critical thought. There will be no winners from this pointless war, which is a major cause of rising food and energy prices as well as skyrocketing gasoline prices. Real hunger is being caused by runaway inflation, and the UK has already spent £2.3 billion aiding Ukraine. The war is a catastrophe, with horrifying casualties and a total failure of diplomacy. Peace efforts must start right away or blame for every life lost would fall on inept and unyielding leaders.

In light of growing living expenses and unchecked inflation brought on by inept governments, the strikes by people providing basic services across Europe are warranted. But the media can’t see this, so it continues to use its tried-and-true, divisive tactics, like targeting unions and working people, while failing to recognize how its distorted and biased reporting feeds injustice and causes misery in communities. When looking at the right-wing media today, anyone who fought to protect their jobs, homes, and families in the 1980s can recognize this game plan. I’m hoping that this time, the general public will recognize the unions’ goals and recognize this sabotage tactic for what it is.