The head of UN human rights says the UK should reconsider its plans to send asylum seekers to Rwanda.

The British government’s decision to send asylum seekers to Rwanda has been encouraged to be reconsidered by the new UN human rights chief, who also issued a warning that similar “offshoring” plans in the past have resulted in the “profoundly inhuman” treatment of refugees.

Volker Türk rejected prime minister Rishi Sunak’s description of the £140 million deal as “common sense” in his first public remarks on the controversy since taking office two months ago. He claimed that the deal was not only ethically and legally dubious, but also “very expensive” and unlikely to succeed.
In the manner that the UK government envisions, you cannot offshore your obligations to another state, Türk told the Guardian. From the perspectives of international refugee law and human rights, it does raise extremely severe concerns.
When asked if the government ought to start over, he responded, “Yes, without a doubt.”

The high court dismissed an application from asylum seekers, charities, and a border officials union to prohibit the Conservatives’ proposal to deport those seeking safety in the UK to the country in central Africa on Monday, concluding that it was legal.

The win was only partial, however, since judges found that the government had made “not an immaterial error” when it confused the facts connected to one Syrian Kurd with another Syrian, one of the eight people it attempted to deport under the plan in June.

But the home secretary quickly said that she would move the cooperation forward “at scale and as soon as feasible.” Suella Braverman asserted that the “vast majority of the British people” supported her in her goal to put an end to the people-smuggling organizations that aid asylum seekers in navigating the English Channel.

The largest number since data collection began in 2018 was over 40,000 persons who crossed the Channel in tiny boats in 2022. The trip is dangerous; four people lost their lives last week when their boat ran into trouble off the coast of Kent.
According to the Rwandan government, it can now accommodate 200 individuals, which is less than 0.5% of the total number of people who have crossed this year and, in the opinion of rights organizations, is insufficient to serve as a deterrence.

There are “ways and means” for how governments may combat smuggling gangs and make sure that individuals in need of protection receive it, according to Türk, who succeeded Michelle Bachelet as the UN’s high commissioner for the rights in October.

The Rwandan effort, however, was likely to accomplish neither, he said.

Of course, sending people to Rwanda is very dramatic, but will it work? he questioned. Which includes making sure individuals who require international refugee protection are recognized as such and discouraging those who do not? If you just take a look at some of the things [we] seen in the Australian setting, history actually indicates that I seriously doubt that.

Türk, an Austrian lawyer and former assistant high commissioner for the UN refugee agency, claimed to have witnessed human rights abuses at Australia’s offshore detention facilities in Papua New Guinea on Manus Island and Nauru. After being deemed unlawful by the nation’s top court, the latter was shut down.

“The treatment of asylum seekers in Nauru and Manus was utterly, utterly horrible,” declared Türk. Any connection between the two programs is rejected by the UK government as being “fundamentally erroneous,” and it is insisted that the deportees’ asylum requests will be processed by Rwanda in accordance with international human rights legislation and that they will not be held during that time.
The prime minister stated his desire to implement “a system whereby if you come to the UK unlawfully, you will not have the right to stay and we will be able to send you to your own country if it’s safe or a safe option like Rwanda” in response to the high court verdict.
The vast majority of the British public, in his opinion, holds that commonsense position, he said.

“Certainly, from my perspective, it’s not common sense,” added Türk, speaking from Geneva. The administration was also urged to use less “emotional language” and rhetoric, as he had previously criticized Braverman for using the “terrible” phrase “invasion” to characterize the cross-Channel crossings. 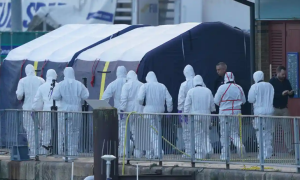 “It’s not as if there aren’t problems with erratic arrivals. That much is obvious, and it’s a problem that needs to be solved. However, we must eliminate the emotions, as well as some of the emotional language. According to him, we must approach the situation in accordance with international norms, human rights, and refugee legislation.

There won’t be an aircraft soon taking asylum seekers to Kigali, despite the high court’s decision. It’s anticipated that there will be more appeals. The summer saw a halt to deportations “until three weeks after delivery of the final domestic decision in current judicial review proceedings,” according to an injunction issued by a European court of human rights.

According to a spokesperson for the Home Office, “Our ground-breaking migration collaboration with Rwanda will give relocated people support to start new lives there while upending the financial model of people-smuggling gangs.

The high court declared it valid on Monday, and the home secretary is determined to making it effective in reducing risky, illegal, and needless travel.

Comparing our program to the Australian model is simply incorrect and erroneous since under our strategy, those moved to Rwanda are not detained but rather relocated and are free to leave if they so choose.

We need your help with a simple favor. Every day, millions of people look to the Guardian for unbiased, high-quality news, and we now receive financial support from readers in 180 different nations.

We think everyone should have access to information that is based on facts and science, as well as analysis that is grounded in authority and integrity. Because of this, we took a different tack and decided to keep our reporting accessible to all readers, regardless of their location or financial situation. More people will be better informed, united, and motivated to take significant action as a result.

A worldwide news organization that seeks the truth, like the Guardian, is crucial in these dangerous times. We are unique in that our journalism is free from commercial and political influence because we don’t have shareholders or billionaire owners. Our independence gives us the freedom to tenaciously look into, confront, and expose those in authority at a time when it has never been more crucial. It only takes a minute to support the Guardian with just $1. Please consider helping us if you can.