Climate change is linked to the extinction of dinosaurs, according to research

What actually led to the extinction of the dinosaurs is a topic of ongoing discussion among experts. According to a commonly accepted idea, Earth was struck by a massive mountain-sized asteroid 65 million years ago. The dinosaurs and 70% of Earth’s species were eventually wiped off by the asteroid. But current research indicates that the dinosaurs’ extinction was probably caused by more than just the asteroid.

A study that appeared in the journal Proceedings of the National Academy of Sciences found a strong link between climatic change and the extinction of dinosaurs. Our understanding of climate change and its consequences on animal populations may be significantly impacted by the findings of this study.

We’ll look at the asteroid impact idea, the explanation for why dinosaurs went extinct, and whether recent discoveries about these enormous animals suggest that climate change was the cause of their extinction.

Dinosaurs: Why Are They Extinct? Death from Above
Scientists think the 110-mile-wide Chicxulub crater was created when a 6-mile-wide asteroid impacted with the Yucatan Peninsula coast of Mexico. The impact set off a series of calamities, including earthquakes, tsunamis, and flames, that spread over thousands of kilometres. For many years, the atmosphere was blocked by deadly gas, dust, and soot, blocking sunlight and obstructing plant photosynthesis. And while some animal species survived the aftermath, the dinosaurs and three-quarters of the other species on Earth perished. 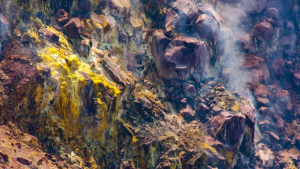 The demise of dinosaurs is directly linked to climate change, specifically climatic cooling, according to recent research findings. A study that was released in the journal Proceedings of the National Academy of Sciences on March 21, 2022 raised the possibility that the extinction of Earth’s species may have been influenced by climate change.
The deadly vaporized stones from the asteroid’s impact at Chicxulub may have filled the atmosphere, producing sulfate aerosols, which are sulfuric gasses, according to researchers Christopher K. Junium and Aubrey L. Zerkle. These sulfuric gases reflect sunlight, causing a post-asteroid “winter” and a worldwide cooling.

How Sulfate Aerosols Might Have Caused the End of the World
Prior to the 2022 study by Christopher K. Junium and Aubrey L. Zerkle on the influence of sulfate aerosols on climate change, experts hypothesized that the Yucatan bedrock’s high sulfur content probably had an effect on climate change. The only catch was that it was unclear if high levels of sulfate gases in the atmosphere would have the kind of climatic impact necessary to cause a widespread extinction event.
There is no question that the initial asteroid impact would result in deadly natural catastrophes including fires, earthquakes, and tsunamis. Additionally, soot would obscure the sun, preventing plant photosynthesis. However, prolonged climate change events would result from significant sulfuric gas emissions. It’s likely that many creatures that survived the initial impact would experience eventual extinction since the aftermath would result in many years of subfreezing temperatures and corrosive rain. 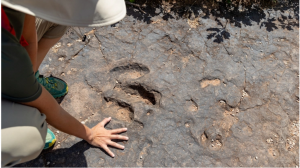 The majority of scientists concur with this idea. However, it has been impossible to confirm the impact of climate change on the survival of biological organisms without solid evidence.

“Sulfate aerosols have long been identified as a main forcing agent of climate change and mass extinction in the aftermath of the end-Cretaceous Chicxulub bolide impact,” the same paper by Christopher K. Junium and Aubrey L. Zerkle states.
Most scientists agree that the bedrock near Chicxulub is rich in sulfur minerals like gypsum. Therefore, the majority of scientists believe that the asteroid impact on the bedrock may have resulted in the air being filled with sulfuric gases. In fact, it appears that the bedrock of Chicxulub may have been the worst possible location for an asteroid impact. Once it had occurred, the air was filled with vaporized boulders that had disintegrated into lethal vapors, including sulfur aerosols.

These notions, however, remained but that: theories. It was impossible to claim that acidic rain and decreasing temperatures may have had a long-term climate impact in the absence of hard evidence.

The Impact of Sulfate Aerosols on Global Mass Extinction: New Findings
The 2022 study found fresh, verifiable proof that climate change has an effect on the evolutionary processes. The air was packed with sulfate aerosols associated to the Chicxulub explosion, according to this new research. Additionally, the abundance of sulphur gases in the atmosphere during the Cretaceous-Paleogene epoch and their high concentration support a longer-term impact on climate change as well as a possible contributing factor to mass extinction.
The Brazos River location in Texas was examined for palaeontological evidence by experts Junium and Zerkle. Approximately 800 miles from the asteroid’s impact, pebbles that had been vaporized and condensed are known to have fallen to the Earth and ended up in this riverbed. Sulfur was only present above the ozone layer and exposed to UV light, according to the isotopic signature.
Additionally, they examined stable isotopes of sulfur compounds using statistical models and diagnostic signs. Junium remarked that sulfur anomalies in the rocks they had analyzed could only be accounted for by chemical processes occurring at great altitudes in the stratosphere. After the hit, these effects would last for months to years. These scientists draw the conclusion that sulfur aerosols undoubtedly contributed to the drastic climate shift that led to the extinction of the dinosaurs because these rocks were created during the upper Cretaceous and lower Paleogene period, when the asteroid impact is thought to have occurred.

Why Dinosaur Research is Important
Knowing what has happened in the past can help us anticipate potential future events and perhaps even avert negative outcomes. As a result, paleontologists have focused on studying dinosaurs in order to map out the distant geological past. This aids in our comprehension of the causes of climate change and its ensuing environmental effects.
The latest research indicates that a high sulfur level in the atmosphere may have had disastrous consequences, including drastic climatic shifts and the widespread extinction of many species on Earth. The widespread extinction influenced the evolution of all species on Earth, including humans. 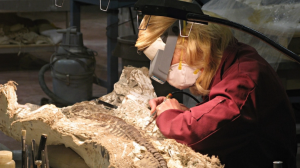 The long-theorized cause of the extinction of the dinosaurs is supported by these fresh discoveries. And although while it’s still unclear how exactly the environment altered, the study advances our understanding of how climate change affects the processes that lead to the emergence of life.

Junium and Zerkle urge other scientists to carry out additional research on the effects of the dinosaur extinction after impact, particularly investigations on how sulfur rock sediments from that time period relate to the environment and the post-asteroid era. We can better comprehend the effects of sulfate aerosols on the environment and make plans for the future once there are more research relating climate change to the extinction of dinosaurs.

Why some supermassive black holes glow so brightly is explained here.